A few of our sheep have fleeces that are long enough to shear twice a year. There are always a few lambs with long fleeces that I can't wait to spin, and then there are the ones that got left out during spring shearing for one reason or another. I counted 12 that need to be sheared.

Eino was featured in the last blog. Bits, the white Gotland-Finn ewe lamb has been coated since weaning, and I just couldn't wait any more! I sheared her a week ago and prepared her fleece for the fair. Wow! Wow! Wow!!! She has the most wonderfully soft, shiny, lustrous lamb fleece. I saved every piece I could. I even saved her belly wool. :-) 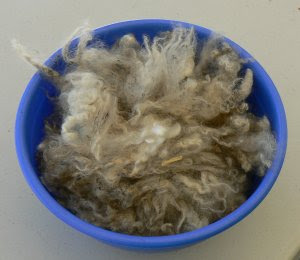 It doesn't look very impressive in the bowl, but it feels so very soft. Reportedly the Shetland Islanders used Shetland belly wool for some of their soft shawls. That's what I have planned for Bits' belly wool. So far it is washed.

Spot the Finnsheep has been coated since her first shearing in February. She was the only ewe who didn't get pregnant last fall. I figured if she wasn't going to raise a lamb, she'd better at least grow a really nice fleece. ;-) Ideally, she'd have 8 months growth or so, but she's leaving, so it's now or never to get this fleece. Here she is ready on the stand. 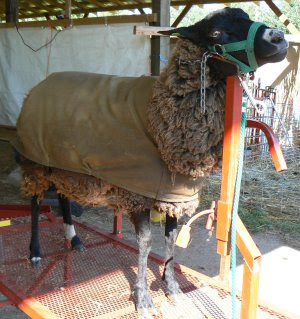 Under the coat - very clean! 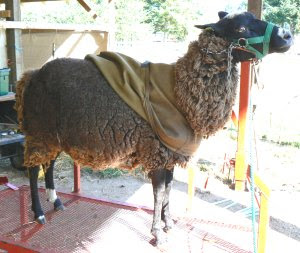 On closer inspection - lots of crimp and color! 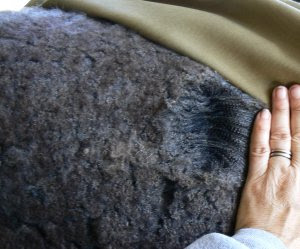 And even closer - YUMMY! 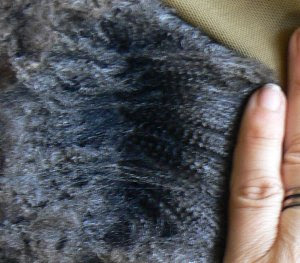 Spot's first fleece is the one that won Best in Show at the Skagit County Fair. This one is even nicer!

And Spot is ready to start growing another award winning fleece! 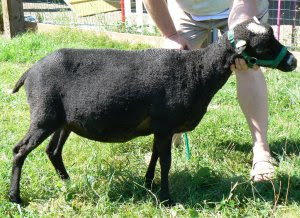 Spot is another "corrugated" sheep. Her fleece "lines" look like a topographic map. These are not wrinkles. This is how the fleece lays when she's freshly sheared. It seems to be a characteristic of our finer fleeced sheep. Buddy and Eino had the same patterns after they were sheared. If you have any clues or theories on this patterning, please let me know. 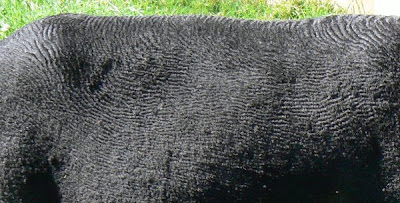 Fancy was next after Spot. Fancy is going to Canada next month, and I just couldn't let her go with all the sticky tips left on her fleece. She grows fleece fast, so will still have a nice spring fleece.

Fancy is holding her very dark katmoget points well. She earned the name "Fancy Pants" because of the dark color extending well up toward her hip. One of the sheep that got "missed" during spring shearing was Daphne. She had sticky tips and matted wool covering the nice new underneath growth. In order to save a lot of the nice new growth, I scissored off the wool that should have been sheared in March!

Here's Daphne after the task. 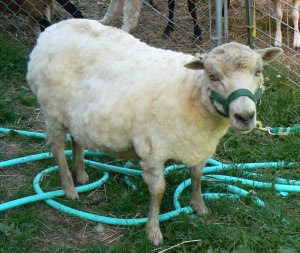 It's not quite as neat a job as the clippers do, but Daphne doesn't care. In a few weeks, the tips will grow out some and make her look more "normal". I noticed that she has a lot more phaeomelanin that I thought. See the tan color on her legs. Her 2006 katmoget ewe lambs had a lot of phaeo coloring. Looks like they got from mom!

Poor Daphne wasn't done until she endured the sheepie torture chamber. I was tired of trimming sheep feet and tired of fighting to hold sheep legs to trim sheep feet. Daphne wasn't making it easy. Instead of continuing to fight her and putting my fingers in the way of those pointy foot trimming shears with a jumping bean of a sheep, I led her to the sheep squeeze/turning table. It was like a death march. Daphne wasn't halter trained as a lamb, and, indeed, was a very wild wooly when she came to us. Just being able to lead her at all was a huge accomplishment. We went step by slow step up to the table. You'd think she had a premonition of what was to come.

We bought the sheep table several years ago thinking it would make it easier to trim sheep feet, give shots, and in general work the sheep. For several weeks, the sheep got to get used to the table being in their pastures and walking through it to get hay and grain. We found out that Scottish Blackface horns (get caught and don't fit "squeeze" well) and Shetland size (they squirm right out between the bars!) don't work well with the (big sheep size) turn table. So there it sat. Until Daphne ran me out of patience with her feet.

After clearing off dirt and rocks, and making sure it still worked (and reminding me *how* it worked), I positioned Daphne inside. Then squeezed and turned! Just like that Daphne was on her side... no, wait!, she was halfway on her side, and halfway turned with her back feet outside the end of the bars. hmmmmm. I turned her back and repositioned her farther inside the cage, and over again. This time I got hold of the troublesome back foot and got it trimmed! However, Daphne is making funny noises and acting very stressed. hmmmm, again. Looking more closely, one bar was very tight against her shoulder, the next one tight just behind her ribs. Now worried that I might really be hurting her, I rotated her back again, repositioned her again so the bars would hit over ribs and pelvic area, and back over on her side. This time she seemed more comfortable - that's relative. She really wasn't comfortable at all!

I quickly finished her manicure - the table was indeed effective at making feet available - and released her. She was a changed sheep. Daphne meekly led back to her pen with the other Hilton sheep. hmmmmm, I'm thinking. She's very stressed, so I watch her for several minutes as she just stands and endures the other sheep pushing in to see who the "new" sheep is. After a while, though, she starts walking around, sampling the grass, drinking water and generally being a sheep. Phew! So, did the squeeze really hurt her? Was she just really stressed about not being able to fight me? I won't really know, and Daphne's not telling. At least her feet should feel better. 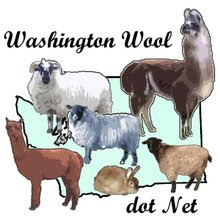 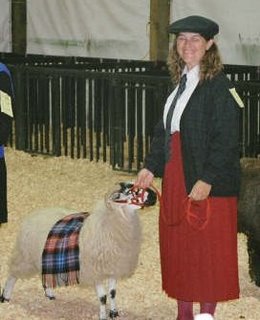